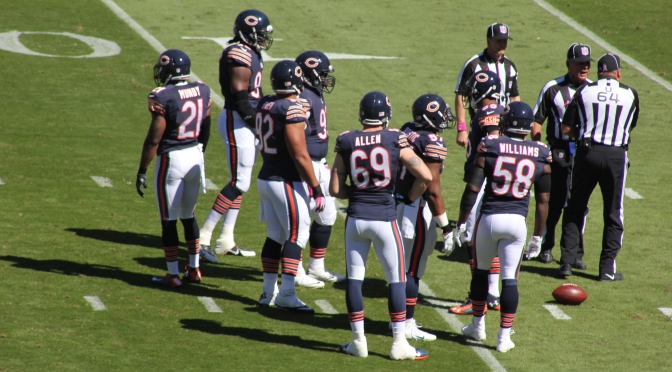 Listen on iTunes or stream here:

In this week’s episode, Jordan and I try to keep things positive after the Bears’ embarrassing loss to the Packers on Sunday night. It’s difficult, though, when you consider Jay Cutler is now 1-11 vs. the Pack and the last NFL to allow 50+ points in consecutive games played with leather helmets. (They were the Rochester Jeffersons of the 1920s.)

Topics discussed include Brandon Marshall‘s blunt assessment of the team — “life is tough right now,” he said —  confusion both on and off the field and how defensive coordinator Mel Tucker still has a job. (We don’t have an answer for the last question; we’re just as confused as you are.)

We also discuss this week’s game against the Vikings and how a few players who may not be household names could spell trouble for the Bears at Soldier Field.

If you have a suggestion for a guest you’d like to hear on the show, or if you’d like to ask a Bears question and have it answered on the podcast, reach out to us via Twitter.

Subscribe to BearsPodcast in the iTunes store
Non-iTunes RSS feed

• Can the Bears’ woes on defense be summed up as simply as this year’s players simply aren’t very good?

• How has defense coordinator Mel Tucker avoided being fired?

• How does Eddy Lacy score a 56-yard TD on a screen pass?

• Is there a silver lining in all the Bears’ offensive woes?

• Is Brandon Marshall‘s doom and gloom assessment of the team accurate? Does it illustrate off-the-field problems?

• Vikings have 30 sacks this season; what’s the Bears’ answer for guys like Chad Greenway and Anthony Barr?

• What’s the key to slowing down Teddy Bridgewater?

• Can the Bears take advantage of the Vikings’ problems on the offensive line?

Brandon Marshall: “When you’re looking at 3-6, there’s not much hope” (CBS Sports)

The most comprehensive Chicago Bears podcast

RIP Doug Buffone #chicagobears #beardown
We talked about Todd Gurley in our latest podcast and Hub Arkush has the Bears taking him in his current mock draft. Will Ryan Pace see him as the best player available even with his injury history? #chicagobears #beardown
Mike Mayock and Matt Miller have Kevin White as the top WR in the draft. #ChicagoBears WR coach, Mike Groh ran drills with White at his pro day. Would Kevin White and Alshon Jeffery make the top WR duo in the league for the next 8 or so years?
Leonard Williams is at the top of some draft experts' big boards. Will he be there at #7 for the #chicagobears ?
Someone posted this #Bears motorcycle on Facebook #BearDown
%d bloggers like this: